Whether they are teaching multiplication facts with the video game Minecraft or exploring engineering concepts in a Lego-themed makerspace, educators in Pennsylvania’s Montour School District always ask themselves, “Is this best for children?”—not just for today, but for the future students will face as adults.

“Our entire school community, led by our superintendent and school board, really believes that they want what’s best for children and that comes with understanding what is best for children now and in the future,” explains Justin Aglio, Montour’s director of K–4 academic achievement and K–12 innovation. “We know what we want our future to look like. We want a school where students are kind, where students are thinkers, where they have the advanced skills and strategies they need to achieve academically. [But] what are we doing today in the classroom to accomplish that? You can’t wish students will be kind five years from now, you have to design it.” With that in mind, Montour has leveraged many of the tools and resources provided by Future Ready Schools® (FRS).

Designing a positive future for Montour’s three schools and 2,870 students means aligning every action and decision with the district’s three core values: (1) putting children first, (2) supporting a growth mindset, and (3) creating a culture of learning. If a prospective curriculum choice doesn’t target all three values, the district doesn’t implement it. If the goals of a potential community partner don’t align with the district’s plans, then the district doesn’t partner with it. That tireless commitment to its core values keeps the district “student centered, future focused,” Aglio explains, and models the importance of collaborative leadership—the overarching gear within the Future Ready Framework. Montour’s leaders turn to the framework, created by the Alliance for Excellent Education, to ensure that all of the district’s efforts reinforce its central vision.

“The Future Ready Framework helped our administrative team develop a common vision and language … that we could use together and that helped us make decisions more effectively as a team,” Aglio says. “We realize that even within the framework some parts will get messy, but as long as we stick to our core values and we trust and believe and listen and support each other, good things will happen.”

Montour School District, located about eight miles from downtown Pittsburgh, is one of twenty-four districts that belong to the FRS West Virginia and Pennsylvania collaborative. The district first joined the FRS network four years ago after attending an FRS Leadership Institute in Pittsburgh. Like most districts at the time, Montour schools were using technology in their classrooms, but most of the implementation focused on how to use technology rather than why to use it, Aglio says. Embarking on the FRS free five-step planning process allowed district and school leaders to step back, outline the district’s goals, and identify “more effective ways to use technology,” Aglio says. 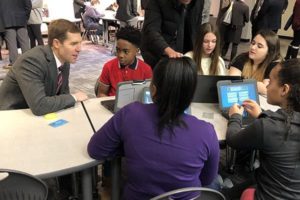 “A lot of research is saying that [working with AI] is a skill that future workers will need, and those reports are saying that students will need those skills as early as 2022,” Aglio explains. “If we aren’t planning and teaching students about artificial intelligence, we aren’t preparing students for the future.”

Montour’s forward-thinking approach to technology-enhanced instruction has established the district as a leader in the ed-tech field. In fact, Aglio is using the Future Ready Framework and other FRS resources to guide leaders from other districts as they develop their own AI programs, he says.

“Being part of a larger network that is likeminded, that shares the same vision, … [i]t’s an opportunity for us to have a platform to share best resources so we can help our vision and what we do in the classroom to benefit students,” Aglio says of the district’s FRS involvement. “To be a Future Ready school you cannot focus just on one piece of the framework. … We have to focus on the other gears within the framework, so they all work together … to create change from the system [level] rather than creating little pockets of change.”

Kristen Loschert is editorial director at the Alliance for Excellent Education (All4Ed), where she has worked for the last five years. Before coming to All4Ed, she spent nearly a decade managing her own editorial consulting business, serving education associations, think tanks, universities, nonprofits, and advocacy organizations. Additionally, she is a former editor of Tomorrow’s Teachers, a national magazine for preservice educators published by the National Education Association, and also worked as an education reporter for daily newspapers in Richmond and Petersburg, VA. She holds a master’s degree in education policy from The George Washington University and a bachelor’s degree in journalism from the University of Richmond.

Is Your Region Future Ready?

NOTE: This is part two of a three-part blog series in which Matthew Friedman, EdD, shares his findings about the trends, strengths, and weaknesses of the Future Ready Schools® network across the four regions of the United States and looks at the exciting possibilities for personalized learning in schools in the post–COVID-19 world. When we…