It’s Not All Black and White: A Conversation Around Equity

Last summer, Adam Phyall and I were engaged in an interesting conversation. This isn’t uncommon as anyone that knows us knows we can debate and discuss just about anything under the sun, but this time it was different. For one, we weren’t at a conference or a school building. We were “tubing” down a river in central Texas (a favorite past-time of ours down here). I throw that in not as a non sequitur, but to mention that we were both out of our normal “professional” environments which enabled some freedom in what turned into a highly engaging discussion around equity. During our 3 hours down the river we discussed our backgrounds. Where we came from. How we were raised. What we each had to overcome and what kind of supports we had. How we raise our children and how we find and cultivate “our crew” of friends.

We discussed race openly and honestly. This included conversations that might be uncomfortable for some, but with our years of friendship and genuine empathy, it was absolutely captivating. We wondered – how do we help students understand the differences in race and culture in a way that is productive? Too often uncomfortable conversations are avoided or left to HR personnel that come in and talk to staff about equity in the hopes it makes its way into the classroom. Not knowing how to proceed on that front, we stuck a pin in the conversation until a later date.

That later date was a month later. I was about to take the stage at the GAMEIS conference in Savannah when Adam came in to chat. We sat in the front row and re-engaged in the conversation from a month before, albeit in a much more formal setting now. As we went back and forth, we weren’t aware that more and more people began to seat around us and listen in to our discussion. They were both “highly engaged and intellectually stimulated” (their quote, not mine) at not only our content but how we addressed what they admitted was a hard topic to tackle with honesty. At one point near the end of the conversation, Adam remarked, “We should just do this as a session.” 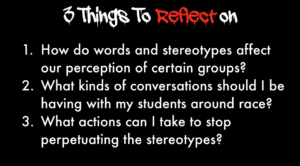 Our opportunity would arrive just a few weeks later. As we are both national advisors for Future Ready Schools, there was an opportunity to present our idea at the February TCEA conference in Austin. Future Ready Schools not only tackles the issues of technology, budget, privacy, and curriculum, but is also an organization that champions opportunities to solve issues of inequity in schools across the country. Adam and I had our opportunity to formalize what started as an informal discussion and turn it into an interactive conversation around equity.

On February 3rd, we walked into our session with both excitement and un-easiness as to how our conversation would be accepted. To ramp up the talk, we decided to wear coordinating t-shirts of “Ebony” for me and “Ivory” for him. As it was a Monday morning session in a week-long conference focused on technology tools, we weren’t sure how many people to expect around the topic. We were pleased to see so many show up ready to engage and discuss the truth about stereotypes we make regularly in our schools and how to use student backgrounds as a way to better inform our instruction rather than pass judgment on their character.

During one of the segments, we asked the audience to list what words we use in education that could lead unintended stereotypes. While Adam and I brainstormed a few, they came up with an overwhelming amount as you can see in the screen shot below: 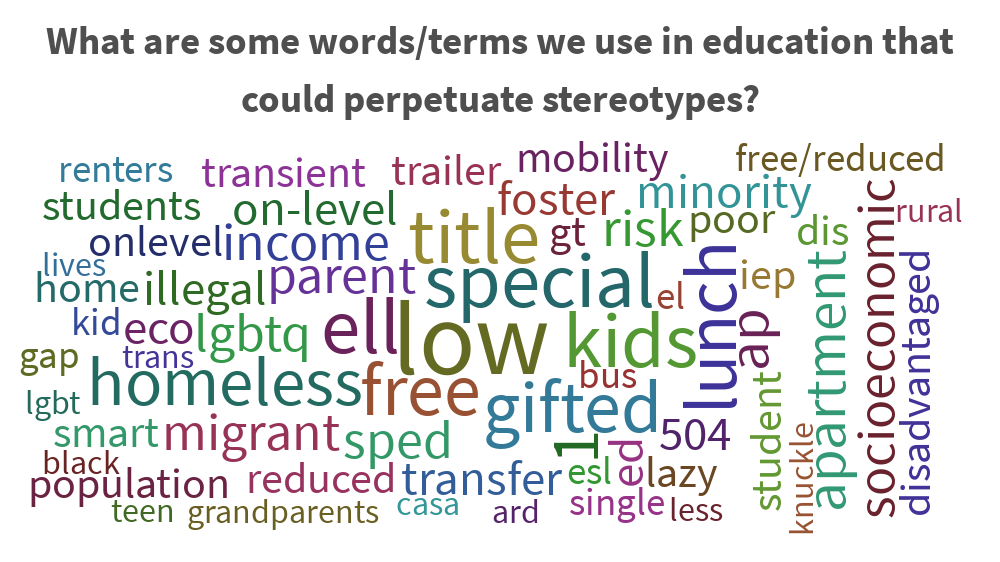 We also discussed recent cases in Texas and New Jersey of students being asked to change their appearance and what other cultural assumptions we might be making in schools. Technology also has a part to play in this discussion. As was witnessed at the conference, eSports is making a HUGE splash across many high schools throughout the country. Those students on eSports teams can practice in school but many also practice at home on $3000+ computer gaming systems. That immediately eliminates many of our lower-economic students from participating, a talking point many in the crowd hadn’t immediately considered.

While I won’t go through every point of the talk, our main goal was not to tell them how to solve every issue of inequity, but rather to make them think and reflect on their current situations. Neither of us represent an entire race. We only represent a viewpoint of two educators that have lived somewhat mirrored lives only from opposite identities when it comes to race. We listed the following three questions for audience members to reflect on:

At the end, we attempted to summarize our unique viewpoints with passion and emotion in 3 minute co-poetry slam titled “Ebony and Ivory”. After the talk ended, we were overwhelmed with the amount of support and interest from the audience. Many commented on the fact that these were the conversations we needed to be having regularly in schools. What kinds of conversations are you having at your school around equity and race? Too often times, these conversations are not conversations at all. They are a set of bullet points on a powerpoint at the beginning of the year staff orientation or a required video that staff watch along with blood-born pathogens so that schools can “check the box” on equity training.

We had definitely touched on a nerve while at the same time stretching both of us out of comfort zones when it comes to presenting. We’re not sure where this goes next but we do have some plans on how to engage students more in this conversation at the classroom level (stay tuned). We also hope to expand this session to more events in the future, as we feel this is a conversation that needs to take place in district offices and classrooms across the country.

This blog was reposted with permission from Carl Hooker.

Carl Hooker is an FRS faculty advisor and education consultant. Connect with Carl on twitter @mrhooker.

Is Your Region Future Ready?

NOTE: This is part two of a three-part blog series in which Matthew Friedman, EdD, shares his findings about the trends, strengths, and weaknesses of the Future Ready Schools® network across the four regions of the United States and looks at the exciting possibilities for personalized learning in schools in the post–COVID-19 world. When we…